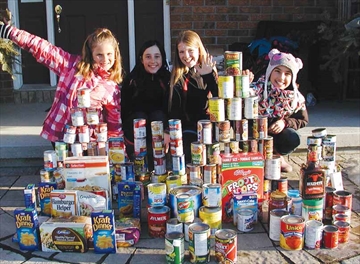 All in all, the four girls collected 145 food items for the Stittsville Food Bank, covering a wide spectrum of food such as beans, soup, pasta, vegetables, sea food and sauces.

The four girls who thought up the idea of a food drive and then under took it are Sophia Skrok, age eight years old; Jayden Clark and Tiana Michalska, both nine years old; and Amal Abed who is ten years old.

Jan Michalski, Tiana’s father, pointed out that the four girls had an idea to do something to help out and came up with this idea of a neighbourhood food drive for the Stittsville Food Bank and then they went ahead and carried it out.